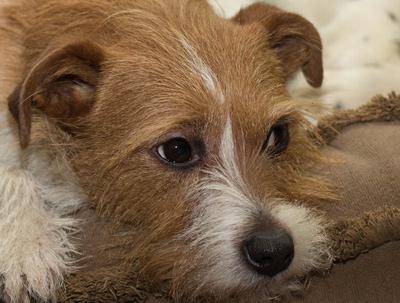 We always like to have two dogs at the same time. They keep each other company if we have to go out and leave them at home. However, when our older dog had to be put to sleep we didn't feel like getting another straight away.

It was a few months later when my husband came home and started talking about a dog he had met that day. "It needs a new home" he told me. "The current owner has to bring it to work with him since a family breakup, and it isn't working too well."

I was sympathetic but when he told me the dog was a border collie I was hesitant as I know they need lots of exercise and mental stimulation.

The next day he elaborated about the dog. "She is a year old, and brown. She piddled on my shoe at lunch break", he went on.

On the third day, he explained "The owner is going to have the dog put to sleep as he really can't look after it on his own. Are you sure we can't adopt her?"

At this point I gave in! I asked my husband to get the owner's number and I said I would call him. By 9.01am there was a phone call.

"I understand you would like to come and look at the puppy?" a male voice said.

Puppy? Puppy? Hmmm. However, I agreed to pop over to take a look.

Imagine my surprise when I arrived and a tiny little ginger and white dog was brought out of the office block on a long lead! I discovered that she was 6 months old (not a year), and a Jack Russell/Border Terrier cross! Not at all what I had been expecting.

I admit it! My heart melted. She came rushing over to me, her whole body wiggling and as soon as I bent down to stroke her she started washing my ears!

The owner passed me the lead and said he wouldn't be a minute, then rushed back into the office. He came out a moment later with a dog bed, blanket and toys. "I'll put these straight in the car, shall I?" he questioned.

Realizing that I was already smitten, and it didn't look like I had a choice in the matter, I agreed.

Half an hour later I rang my husband to tell him that I had a little dog sitting on my lap!
And that is where she now considers is her place. She has adopted me as her "human".

Join in and write your own page! It's easy to do. How? Simply click here to return to Adopt A Pet.